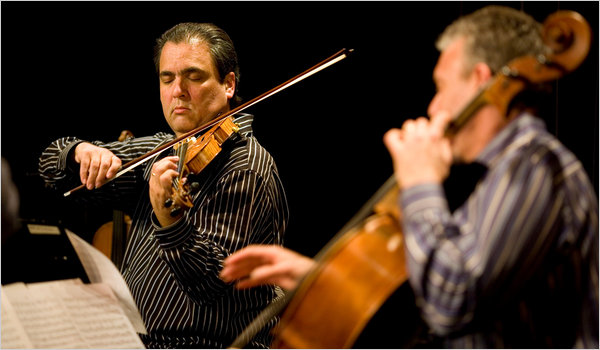 In 1969 David Balakrishnan, then a teenage violin student, attended a Jimi Hendrix concert in Los Angeles that led him to reconsider his approach to his instrument, and to music more broadly. He began learning some of Hendrix’s guitar solos on the violin, and he decided that his repertory should embrace both classical music and pop. As a composer he extended that philosophy to his own music.

Mr. Balakrishnan’s colleagues in the Turtle Island Quartet, founded in 1985, had similar experiences, though not necessarily by way of Hendrix. That explains the group’s quirky approach to programming. Until now it has drawn heavily on jazz; its transcription of the Coltrane classic “A Love Supreme” is one of its biggest successes. But on its latest recording, “Have You Ever Been…?” (on Telarc), the group veered toward rock, with a tribute to Hendrix featuring a handful of string-quartet arrangements of his songs.

Those arrangements were the heart of the quartet’s program at the Leonard Nimoy Thalia at Symphony Space on Wednesday evening. These were not merely note-for-note transcriptions. That would have been impossible, given the importance of Mitch Mitchell’s drumming on the original Jimi Hendrix Experience recordings, to say nothing of the textural complexities created by Hendrix’s wizardly use of feedback and other forms of distortion.

That said, the players came close in “All Along the Watchtower,” a Bob Dylan song that Hendrix made his own. Just about all the details are in place, and much of the original energy is too.

Mostly, though, the Turtle Island versions used Hendrix’s chord progressions, vocal melodies and signature guitar solos (often passed around the full ensemble) as jumping-off points for fantasies that inhabited the common ground between free jazz and classical modernism. And if the quartet wisely abandoned any hope of approximating the Experience’s drum sound, the cellist, Mark Summer, added rhythms of his own through techniques that combined pizzicato, slapping the neck of the cello with his hand, and tapping his foot. And in a freewheeling solo-cello arrangement of “Little Wing,” Mr. Summer had the spotlight to himself.

When these versions worked, they were not only fun but also offered an illuminating glimpse of the music’s possibilities beyond those Hendrix already explored. But often it seemed as if the flesh was willing (the notes were there) but the spirit was weak. In “1983… (A Merman I Should Turn to Be),” the players suggested the ghostly whine of Hendrix’s electronically manipulated original, but the magic remained out of reach.

That was also the case in “Voodoo Child (Slight Return),” though the group’s expansion on “Gypsy Eyes” had an allure of its own. Mr. Balakrishnan should, however, give the other violinist, Mads Tolling, a Hendrix history refresher. Mr. Tolling introduced “Gypsy Eyes” as a song Hendrix wrote for his post-Experience group, Band of Gypsys. Not so. It appeared on “Electric Ladyland,” the album from which most of the group’s Hendrix material was drawn.

The program also included the ensemble’s arrangements of pieces by John McLaughlin and Chick Corea, as well as a Coltrane tribute, “Model Trane,” and three of the four movements from Mr. Balakrishnan’s “Tree of Life,” a rhythmically inventive suite built partly around modal Indian melodies.